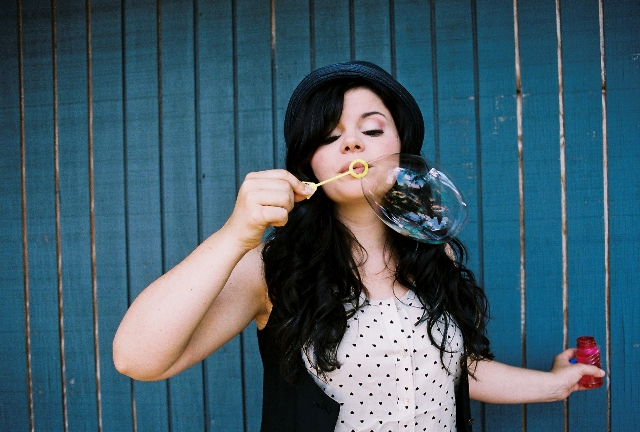 Just because their time on The Voice ends doesn’t mean I stop checking in with every member of our Voice family. This week, I snagged some time with Rebecca Loebe, who was a member of Team Adam in season one and has recently finished her new album, Circus Heart, which you’ll be able to hear on September 18. Here’s the dish:

“I started the record feeling like I wanted to pick up where I left off with [the last album] Mystery Prize,” she said. “I realized I didn’t want to make another Mystery Prize. I’m still very proud of it but I wanted to experiment with some new sounds and cover some new ground.”

With that goal in mind, Rebecca put together a team to help her achieve it. “I had a producer whom I loved named Matt the Electrician from Austin, Texas. I asked him if he’d produce the album because I love his albums so much, but he’d never worked with anybody else as a producer. It was his first album producing and it was my first album outside my Atlanta comfort zone. We really kind of invented the approach for each song as we went.”

The biggest part of her team, however, were the fans who contributed so that she could make the album. Rebecca was one of the first Voice artists to crowd-fund a post-show release. “We depend on our fans to help us create the music that they depend on for entertainment or emotional release,” she explained. I’ve sent out 250 copies to the people who pre-ordered the album. These 250 people helped me fund the entire album. Every single person who contributed was an integral part of funding the project and giving me the resources I needed to make this creative process work. I’ve been getting feedback from them in the last week, and it’s just been amazing. It’s all been overwhelmingly positive.”

With the release of Circus Heart, she’s giving her West Coast fans the best gift we could ask for: a West Coast tour. “I’m really excited to come out to California. I’ve got some great shows in Los Angeles, San Francisco and San Diego,” she said, adding that “I’m always happy to play in my hometown Atlanta, and for the folks in my new hometown, Austin, Texas.”

Rebecca has always been well-connected to her fans. On her website, RebeccaLoebe.net, she has monthly full-length albums that can be downloaded for only $5, allowing fans to hear new music from her without having to wait for a new album or an upcoming tour stop in their area. Through Twitter and her blog at RebeccaLoebe.com, she’s readily reachable for questions, comments or just saying hello.

And although it’s been more than a year since she performed on The Voice, Rebecca says she’s not concerned about needing to distance herself from that experience. The fans she found through the show will be able to hear some of those same songs on her tour. “I usually play at least one of the songs that I did on the show, just out of respect for people that have come out [based on] what they heard on the show,” she told me. “Plus, it’s just different. I really enjoy singing ‘Come As You Are’ and I enjoy singing ‘Creep’.” Fun fact: Rebecca was the only non-semifinalist to appear on The Voice‘s season one highlights CD.

She still appreciates the journey of having been one of the first people to participate in what is now a worldwide phenomenon. “There was something really special in my experience of doing season one because no one knew what to expect at any step in the process,” she added.

As for season two, she told me that she was happy with the results, having gotten an early listen to the man who’d win it all. “I was rooting for Jermaine [Paul] the entire time. I happened to see his audition in New York. Jermaine was the first person who walked in the door at the open call auditions. When he left, I was just gaping. I really believe in his talent.”

The future looks similarly bright for Rebecca. “I’m really excited to release a new album,” she said. “I’m really grateful to the fans that supported me. I was just really floored by how many people all over the world participated in it. It’s really moving.”

Check out Rebecca’s iTunes catalog and make sure you’re following her on Twitter at @rebeccaloebe. Circus Heart arrives September 18!