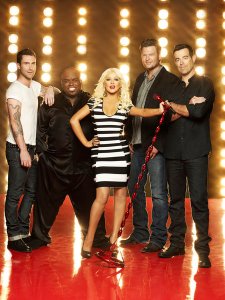 Things are getting thorny in the battle rounds on The Voice, as with only three steals left in play after last night’s episode (two for Christina and one for Blake), it’s soon to be back to “win or go home” for the artists. Not to mention: are any more battles going to be truncated for time like they were last Tuesday night?

The night opens with Team Blake, as Liz Davis is matched with Nicole Johnson on a song that Blake knows well – his wife Miranda Lambert’s hit “Baggage Claim.” It’s amusing to watch Blake quip that he’s “met [Miranda] once or twice.” Team Blake mentor Michael Buble tells it exactly like it is to the two ladies: “You’re fighting for your life.”

Having loaded his team with country singers this season, Blake is now looking to narrow it down to the best of them. He tells us that he’ll be listening for Liz to be particularly clear with her words. He’s also worried that the key of the song is too high for Nicole, who’s a little bit pitchy in final rehearsal.

With that, it’s into the ring for Liz and Nicole, who actually sound a fair amount alike throughout their performance. Their rendition doesn’t quite have the attitude that the original does, but it’s entertaining. Christina compliments both singers, while Cee Lo likes Nicole, and Adam points out the similarity between their sounds before siding with Nicole. That brings the conversation back around to Blake, who believes Miranda will be “so proud” of Liz and Nicole’s version of her song. He expected Liz to be a little less laid back on stage, and heard Nicole lose her breath a few times, so each artist has something to work on. After a moment of deliberation, based on her experience and the fact that she didn’t lose her breath during the performance, Blake picks Liz to advance.

Nicole hopes for a steal from Christina but doesn’t get one, and has an emotional moment backstage, only to have Blake leave the stage, come up behind her and give her a consoling hug. That, ladies and gentlemen, is another example of why Blake Shelton is awesome. He is a class act, even if he doesn’t know who Florence and the Machine are.

It’s Team Adam that’s next up to the plate, with Alessandra Guercio against Kayla Nevarez, tackling Katy Perry’s “Wide Awake.” Kayla wants to know how they ended up together, and Adam explains that he thought rather than strategizing with his pairings, “let’s just make these incredible performances,” and quips “I’m the best coach ever, huh?” He’s not going to get any argument from me on that.

Advisor Mary J. Blige calls Alessandra “imprisoned by being perfect” and thinks she could be dynamite if she stops thinking so much, while Adam refers to Kayla as “more natural” as opposed to Alessandra being more educated. The girls get some notes from Adam in their last rehearsal before it’s time for them to battle.

Alessandra’s additional education comes out in the form of more stage presence, but both ladies are clearly giving the song everything they’ve got, and Adam is very much a proud coach after their performance. Blake likes the grit in Alessandra’s voice and the sweetness in Kayla’s, and gives Adam no help whatsoever. Christina wants both of the singers to tap into “exactly uniquely who you are” and agrees that the battle is close. Cee Lo notes that Alessandra “had more attitude” and favors Alessandra.

Adam gives notes to both singers, telling them that “you both had your issues, but we all do.” He says that he felt Alessandra’s insecurity, telling her “I want you to believe in yourself and understand how good you are.” Conversely, he tells Kayla – reminding her of her blind audition, where she told him they’d better win – that it’s good to believe in herself but also be humble. He picks Kayla as the winner of the battle.

Just as Alessandra thinks she’s done for, Christina jumps back in and uses one of her steals to save her. “You can teach her a lot,” Adam tells Christina afterward, as a shocked Alessandra gathers herself backstage.

If you had Team Cee Lo’s Ben Taub and Mycle Wastman in the “got nearly cut out of the show” pool, you were right. We see briefly that Cee Lo picked Mycle and Ben went home. They weren’t the only artists to get their battles narrowed down: Team Adam’s Adanna Duru and Michelle Brooks-Thompson also matched up, with Adam settling on Michelle, and Team Christina’s Beat Frequency also took on Laura Vivas, with Laura winning the battle. I will say nothing about this only because I already said it in my editorial piece after last Tuesday’s cut-downs.

The last match of the evening is Team Cee Lo’s Mackenzie Bourg against Emily Earle. Cee Lo’s given them Owl City’s “Good Time” for their battle. It’s out of Emily’s comfort zone, which Rob notices, while Mackenzie isn’t sure what to do since he won’t be playing an instrument during the performance. At the final rehearsal, Mackenzie has to put the guitar down.

Their battle is a fun one that gets the audience into it, and the coaches seem to be enjoying themselves as well. Mackenzie’s dad is particularly proud of his son, so emphatic in his cheering that it draws Adam’s attention. Adam says “the chemistry wasn’t what I wanted it to be,” and picks Emily despite being afraid that Mackenzie’s dad might beat him up for it. Blake thinks Mackenzie had too many breaks in his voice, and when he says Emily sounds like he would’ve sounded singing that song, Adam can’t help a grin at the thought of Blake performing an Owl City/Carly Rae Jepsen tune.

Christina likes Mackenzie, bringing us back to Cee Lo, who admits to “mixed emotions” before he selects Mackenzie. Emily goes home empty-handed, but glad for the chance to grow – and Christina is surprised that Blake didn’t try to steal her.