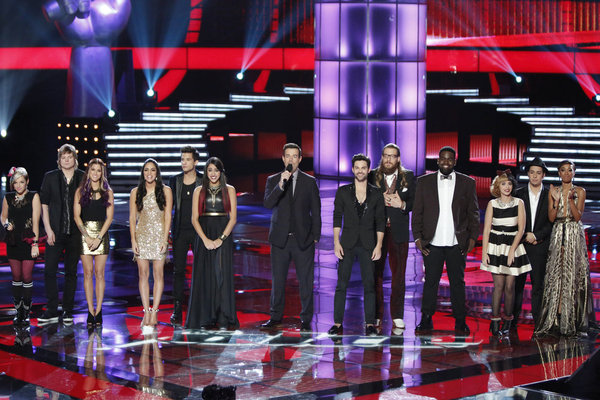 The Voice‘s Top 12 took the stage on Monday night to secure their spots in the Top 10 – and after the show ended, they spoke with Big Red Chairs to critique their performances and discuss what’s next for each of them.

“I honestly feel like I set out to accomplish what I did,” said Team Blake’s Michaela Paige, who opened the show with her rendition of Pink’s hit ‘Blow Me (One Last Kiss).’ “I picked a challenging song, which most people don’t think of that as a challenging song. I wanted to go out there and really show people that my hair doesn’t define me. I can still be a star regardless of all that jazz. So I really think that I accomplished that.”

If she advances to the next round, “I’m hoping to do a ballad,” she added. “I really want to show people the softer side of me and it’s about time that we do that.”

“I need to watch back my performance and really study it. But just in the moment, I really felt like I nailed it,” said Team Cee Lo’s Cody Belew on his take of Tina Turner’s ‘The Best.’

“I am an artist who has not really given away everything at the beginning. I’m layering it and that’s by design,” Cody explained. “Next round I’ve requested an even bigger, more epic song just because I keep wanting to prove to America that I can hang with the big dogs. I’m a fun guy but I can also bring it.”

Asked if he thought he’s been underestimated, he said, “I do, but that’s not necessarily a bad thing. It leaves room for surprise, for improvement.” He added with a laugh, “I can do pretty much any song you can throw at me. They’ve tried to get rid of me like four times now with giving me all these crazy songs to do. But I think I’ve consistently proven that I can hang.”

Of her performance of Florence and the Machine’s ‘Spectrum,’ Team Adam’s Amanda Brown said, “It’s in the direction of what my original music sounds like. It’s always difficult when you’re performing covers. It doesn’t represent you one hundred percent like your original music will.”

“I definitely want to continue to do music that maybe will give America a better idea of what my original music will sound like,” she continued. “I think people might be a little surprised but I definitely want to ease more in that direction from this point forward.”

Team Blake’s Terry McDermott characterized his choice of Boston’s ‘More Than A Feeling’ as “deliberately difficult,” and added that he has no concerns about continuing to stay in the classic rock genre that he’s impressed with thus far in the competition. “I know who I am and what I feel I am,” he explained, “and I feel like if I’m going up there, I should be honest and I should put on the kind of show that really, really exemplifies that and I think that’s what I want to stick to.”

Still, he knows that The Voice‘s younger audience might not know classic rock: “I’ve had some messages from people about [his blind audition song, The Who’s] ‘Baba O’Riley’ saying, ‘Is that your song?'” he said with a laugh. “No, that is very much not my song and if it was my song, you’d be phoning me on a private island somewhere in the Bahamas.”

“This is what runs in my veins,” he added. “This is what I’ve been doing since I was a child and this is what I’ll be doing when I’m an old man. I would happily die on stage. You’d get spectacular ratings if somebody dies on stage,” he joked.

For Team Adam’s Melanie Martinez, Young the Giant’s ‘Cough Syrup’ was a challenge. “The song wasn’t really in my comfort [zone] I guess, but I’m just happy that I did it and happy that I got it over with in a way. I’m just excited,” she confided.

Going forward, she said that “I just want to show America a different side to me and kind of explore a little bit, but stay within who I am as an artist. The challenge is getting America to like me and vote for me. I’m just hoping.”

Team Blake’s Nicholas David was still processing his performance of the Huey Lewis and the News hit ‘The Power of Love’ as he walked the red carpet. “When I play, I kind of open myself up as a vessel, so it’s kind of hard to recall,” he admitted. “It will take me a little bit to come back.”

He added that he was surprised to have won America’s vote last week “To a certain degree. But this whole adventure never ceases to amaze me. All these turns and twists, I can’t not be surprised. I go into every situation with an open mind and an open heart.”

What would he like to do next? “I really hope to be able to play the piano,” he said. “I’ve been playing the piano for longer than I’ve been singing.”

He added that he’s planning something after the show with his battle round partner, Todd Kessler. “We’ve already spoken about that while we were here,” he explained. “We just gravitated toward each other and became brothers. He calls every day before the shows and stuff. He lives in Chicago and I live in Minnesota, so we’re not too far apart. That’s definitely on the to-do list.”

Fan favorite Trevin Hunte said that the rave reviews of his past performances both gave him confidence and added pressure as he sung ‘When a Man Loves a Woman.’ “It does add a little pressure,” he explained, “but from the time I stepped on the stage in the blind [auditions] I feel like I’ve grown as a person and an artist. I think I’m getting more confident. I strive to just give a good performance so I’m definitely happy and excited with what I did tonight.”

Team Christina’s Sylvia Yacoub performed the Celine Dion hit ‘My Heart Will Go On,’ and afterward she said, “I feel like I went out there and I wanted to do something that was a risk and put my voice in it. I feel so good about it. I hope it encourages people to take risks.”

While she played coy with her ideas for the future, she did say that “I just want to be known as a singer that people feel like they can relate with, [that] they feel like they can listen to my music and really feel a connection. I obviously want to put out fun pop music and stuff like that, but I want to be that voice for people.”

Team Blake’s Cassadee Pope left her heart out on the stage with her version of ‘Behind These Hazel Eyes’ by Kelly Clarkson, which she said reminded her of her relationship with her father. “I am so happy,” she said. “I just wanted to pour my heart and soul into it and I felt it. I was on the verge of tears the whole time because I was just so overwhelmed with emotions, happiness and sadness, just all of it. I just went out there and gave it everything.”

Having well established herself as a pop-rock singer, she’s ready to move on: “I absolutely want to try something different. I felt like tonight was the last night to really set in stone what kind of artist I am. Last week Adam [Levine] wasn’t sure and I was kind of afraid that America wasn’t sure. I was like ‘Okay, I’ve gotta stick one last one in there,’ but I’m ready to kind of expand. I feel like I’ve showed everyone who I am and I can move on to something different.”

“I want to definitely take it down a notch and do a ballad,” she added. “I just want people to connect with me. When Christina told me that she understood what I was going through with my father, it made me feel like, okay. That’s one of the biggest reasons I’m doing this is for people to be able to relate to me and connect with what I’m singing. I hope that continues.”

“I wanted to just really have fun with it and perform. I wanted to give a good performance and I think I did,” said Team Christina’s Adriana Louise after her performance of Carrie Underwood’s ‘Good Girl.’

“I’m still freaking out about it,” she added, reflecting on Christina Aguilera’s decision to save her last week. “In my head I was going home. I packed that morning. Because I wasn’t entirely happy with my performance last week. And it was me, Devyn [DeLoera] and De’Borah. Devyn’s my best friend and De’borah was my roommate. I totally thought De’borah was going to get saved by Christina. It’s just shocking.”

Adriana’s teammate and fan favorite Dez Duron is enjoying the ride. “I had fun out on stage singing one of my favorite songs in the world so I cannot ask for anything more,” he said after singing ‘Can’t Take My Eyes Off You.’

Having returned to The Voice stage after missing the cut last year, he said that his time on the sidelines proved helpful. “There are a lot of changes this season that I was not ready for. The live playoffs and the knockouts really caught me off guard,” he admitted. “But getting to sit back and watch what the show is about definitely helped me out.”

“I want to learn everything that I can from my coach,” he added. “She is the best coach I could ever ask for. She is even better than I could have imagined. I want to show America everything I’ve got.”

Now his fate, and everyone else’s, is in your hands. Voting for The Voice is open until 10 AM EST tomorrow – and which two artists will be sent home is revealed tomorrow night at 8 PM ET/PT on NBC!