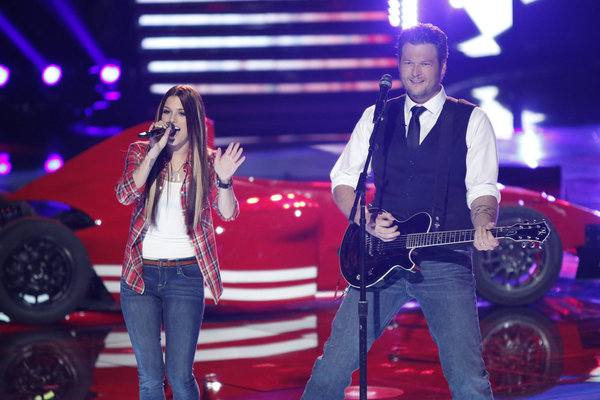 The Voice is less than 24 hours away from crowning a Season 3 winner. As they waited for America’s votes, finalists Terry McDermott, Cassadee Pope and Nicholas David joined Big Red Chairs on the carpet to share their thoughts.

The evening started with a touching tribute to the victims of the recent Newtown, CT school shooting, as the Voice coaches joined their live show finalists, host Carson Daly and social media correspondent Christina Milian for a rendition of Leonard Cohen’s “Hallelujah” while holding placards with the names and ages of the victims. If you missed that opening performance, you can view it here.

The tragedy also affected Cassadee later in the evening, during her repeat performance of Blake Shelton’s hit “Over You,” as the artists were asked to reprise their top renditions of the season. “I connected with it even more now because I was thinking about Connecticut and how horrible that is and losing people,” she said afterward. “I was thinking about that.”

The show had to go on, however, and the artists made the most of it with a trio of new performances as well as duets with their coaches. “[The night] started off on a somber note but we’ve got to celebrate life while we have it,” said Nicholas. “I was excited to end [my run on] the show like that. [A] piano was on fire, things were blowing up, people were hanging from trapezes, there’s a mini Cee Lo. It was too cool.”

Going out on a big note was definitely his intention. “After last week’s performance being so stripped down and emotionally raw, I was like ‘Let’s just blow some stuff up,'” he continued. “Let’s go for it.”

Another surprise on Monday night was Adam Levine guesting on Blake Shelton and Terry’s performance of Aerosmith’s “Dude Looks Like A Lady” – with the shirtless Maroon 5 front man channeling Axl Rose. According to Terry, Adam’s wardrobe choice (or lack thereof) wasn’t part of the plan.

“I have no idea,” he said when asked where it came from. “All the way through rehearsals, he had a shirt on. There was no headband. There was nothing. So that was a surprise to us. That’s why when I looked over, Blake is laughing his ass off, and I’m like ‘Really, what the hell’s going on here?'”

“We had great fun with that,” he added. “It was just a nice little touch. we were having great fun in rehearsal but that just finished it off.”

Terry was shocked when Blake revealed that his father, Terry McDermott Sr., had flown to Los Angeles to support his son in the finale. “To have him in the room to feel the atmosphere, to see the action, it was wonderful,” he said, though he added that his heart might be a little weak after all the surprise appearances from his loved ones over the season. “I was like, you could just put me through an assault course or an endurance test, you don’t have to keep wheeling out family members,” he quipped.

With their final performances in the books, all the three artists can do is wait for America to vote and crown a winner. Cassadee is the favorite to win if you listen to Internet buzz, but not necessarily if you ask her. “I try not to let it affect me because I feel like the moment you get comfortable in this situation, the moment it bites you in the ass a little bit,” she explained. “It’s been a great encouragement and it makes me feel good, but I’ve always kind of been my worst critic.”

Never having looked at the series as a competition, Nicholas was just enjoying the experience. “This has been the adventure of a lifetime,” he reflected, “but I’m excited to close the chapter on this adventure and start a new book. I felt this was a good way to end it.”

Teammates Cassadee and Terry are now head-to-head, but Cassadee added that it’s not an uncomfortable experience to compete against her friend. “It’s not weird at all because we’re individuals,” she said. “Our coach makes us feel very special individually. He doesn’t do favoritism or anything like that. There’s never been a weird moment.”

“Frankly, we’ve never really been that competitive,” agreed Terry, who could have summed up the entirety of the Voice season as he said, “We get on so well, and the way we’ve always viewed it is you just leave it on the stage and then other people decide. Nobody’s trying to sabotage or be negative. We want the best for each other and if you win, it’s because you deserve to.”

The season 3 winner will be revealed as The Voice wraps up its two-night Season 3 finale Tuesday at the special time of 9 PM ET/PT on NBC.