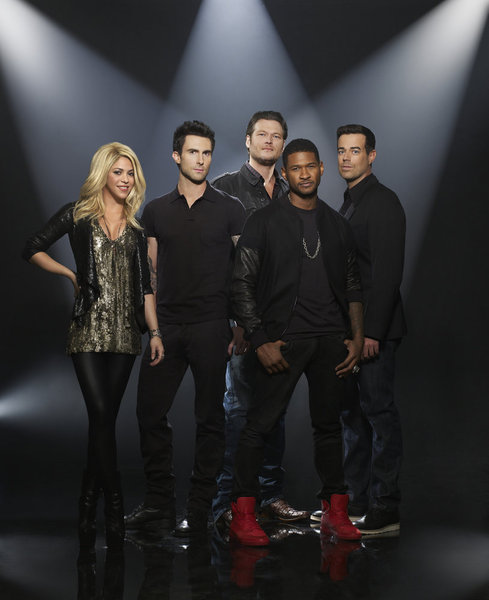 After last week’s blind auditions brought The Voice its first 13 artists of Season 4, it’s time to continue the search for the other 35. Adam (last seen announcing that Maroon 5 is headlining this year’s Honda Civic Tour) has 9 spots left on his team, Blake (last seen in a chicken costume) needs 9 more for his roster, Shakira is looking for 8 more artists and Usher has 9 openings to fill. Who will they discover tonight?

First to hit the stage are The Swon Brothers, who like any good siblings, rib each other constantly through their before-audition interviews. They perform “American Girl,” which incites a burst of air drumming (and a little singing along) from Adam, but it’s Shakira who is first to hit her button, followed shortly by Blake and then Usher. The duo’s being from Oklahoma immediately makes them Blake’s to lose, if he’d stop making up lame words. (Watch Adam facepalm.) The guys make the obvious choice and sign up with Shelton. Between The Swon Brothers, The Morgan Twins and Midas Whale, might this be the season we see a duo make some headway on The Voice?

Blake: When Shakira said ‘Let’s have some fun together,’ I thought I was screwed.

Next up is former gymnast turned singer Taylor Beckham, whose version of “I’m Going Down” draws Usher’s attention within the first minute. Shakira decides to come in as well, meaning that it’s a battle of the new coaches this time around. While we find out that Shakira is pretty flexible, Adam chimes in to say that he’s never seen Usher so excited. Indeed, Usher is sitting there with fingers crossed, on the edge of his big red chair like a kid hoping for the big present on Christmas.

Blake: Adam’s not helping you, Shakira.
Shakira: No, he’s not. I’ll deal with him later.

Unsurprisingly, Taylor selects Usher as her coach, leaving Shakira to warn Adam that she’ll be watching him from now on. Sam Alves is the third singer to perform, and his version of “Feeling Good” isn’t as great as Dez Duron’s in Season 3, but it impresses Carson. Unfortunately, Carson doesn’t have a button to push. Sam goes home empty-handed, except for a farewell hug from Shakira, but repeats his belief that everything happens for a reason.

The next artist is Karina Iglesias, a vocal teacher determined to make her grandmother proud. Adam dares Blake to push his button before Karina even starts singing, but Karina’s version of Melissa Etheridge’s “I’m The Only One” instead has Blake yelling at Adam to “push your goddamn button.” Adam finally does at the last possible second, but unfortunately for him, so does Blake.

Adam: That was the most stressful thing I’ve ever gone through in my life.

Shakira also mentions stress as the reason why she didn’t push her button, and publicly wants to know what’s wrong with herself. Adam talks about how he thought Karina’s performance might make the light fixtures explode. As the discussion continues, we find out that Blake is the only person on the panel who doesn’tknow at least a little Spanish. This may be his downfall, because Karina joins Team Adam. At least Adam and Blake hug it out afterward…although Blake has a hard time letting go.

The next artist called is Garrett Gardner, a returning hopeful who didn’t make the cut in season 3, and is back to show that he’s learned from the criticism he received, which is entirely possible (see: Dez Duron, Daniel Rosa, etc). Garrett’s version of The White Stripes’ “Seven Nation Army” isn’t as awesome as Jamar Rogers’ was, but just when it looks like Garrett is going home empty-handed again, Shakira steps in to take him for her team. Adam recognizes Garrett and is thrilled to see him back, telling him that his late father is looking down with pride. Adam Levine, The Voice morale officer.

Adam: You’re so much stronger than you were.

Garrett thanks Blake for his comments from the previous season and is glad to finally make a team. Then we get into the much-hated montage of successful auditions, where we meet J. Sun, who also joins Team Shakira, Duncan Kamakana of Team Adam, and Chelsea M, who punches her ticket to Team Usher. That’s three artists with a combined 39 seconds of screen time, and as of yet, their full blind auditions are also not available on The Voice‘s YouTube channel with the other successful performances. This montage happens every season, and it remains the most frustrating thing about the blind audition phase of competition.

Stepping to the microphone after the montage is Holly Tucker, who hopes to break out from the Baylor marching band with her version of “To Make You Feel My Love.” Holly might love country music, but she earns button pushes from Adam, Shakira and Usher almost immediately. Adam so wonders what Blake’s deal is that he stands on his chair to point at him, and this convinces Blake to jump in, too.

Adam: Those cowboy boots scare me, though. They only mean one thing – gotta fight Blake.

As if to prove Adam’s point, Blake breaks out his finger-pointing before Usher can even really start talking. While the guys play “look how similar we are,” Shakira suggests that she would be the adventurous choice. Adam then points out that he had to “prod” Blake to turn his chair around. That doesn’t seem to matter, though, because Holly picks Blake as her coach anyway. Afterward, Adam admits to Usher that country artists are “almost never” stolen from Blake. He’s just that good?

After another montage of failed auditions, meet Landon Medvec, who like many before him is hoping that he can get the break that will allow him to leave a “day job” and become a musician. His rendition of James Morrison’s “You Give Me Something” has Blake questioning his gender, and he’s not the only one. After the audition ends without any chairs turning, Usher admits that he also thought Landon was a girl.

Adam: I get it all the time, so don’t worry about it.

Michelle Chamuel proves that appearances can be deceiving with her fierce version of Katy Perry’s “I Kissed A Girl.” Adam wants her on his team almost immediately, and Shakira joins him less than a minute later, so they’ve got a front-row seat to Michelle singing like it’s the last song she’s ever going to perform. Usher crashes the party at the last second, making it a three-way contest to land Michelle, who calls all of them “amazing humans.” Blake is disappointed not to be included in that, which makes this happen:

Usher: He’s not a human. He’s an alien.
Blake: He’s a sasquatch.
Adam: That’s what it is!
Usher: I was thinking more snuffleupagus.

Discussion about Shelton’s species (and a commercial for the Honda Civic Tour, and Carson Daly randomly plugging NBC’s new show Hannibal) aside, Michelle declares that “for some reason,” she’s going with Usher. That comes as a surprise to everyone other than her, but as long as she’s happy, that’s what matters.

Following Michelle is Julie Roberts, and if you think she looks familiar, you’re not wrong. Julie has a gold record under her belt and, as we see in her reel, once appeared on Jay Leno. However, after the failure of her second album, she lost her deal – and if that wasn’t bad enough, her family lost their house and she was diagnosed with Multiple Sclerosis. Yeowch. Julie makes the ballsy decision to sing Blake’s hit song “God Gave Me You,” but it has much less energy to it than the original, and she fails to draw any interest. Blake recognizes her immediately, however, and profusely apologizes.

Blake: I’m still sick to my stomach over this.

While Julie decides to get a glass of wine, brightly-colored former child star Monique Abbadie arrives with Shakira’s “Loca,” and showing off the picture she took with Shakira at one of her concerts years earlier. Once Monique starts singing, Shakira immediately pulls her shocked face, while Blake slams his button despite his previously established language barrier. Shakira and Usher jump in simultaneously, while Adam appears to push his button just because everyone else has, throwing up his hands after he does it. Everyone starts making arguments, except for Blake, who sees the writing on the wall.

Everyone promptly literally votes for Monique to pick Shakira, though Adam offers her a bribe if she’ll be so crazy as to select Blake. Surprising absolutely no one on the entire planet, Monique joins up with her idol.

The final performance of the night belongs to firefighter, father and country singer Warren Stone, who sings  “Colder Weather.” He gets Adam to turn around before he’s through two sentences. The camera hovers on Blake, but it’s Shakira who’s next to spin. Finally, as Warren nears the end of his 90 seconds, Blake decides to enter the fray. Adam and Shakira are determined to finally wrest a country artist away from Blake by any means necessary, and Adam finally succeeds, convincing Warren to join Team Adam. Celebration ensues.

Adam: I was also really happy to watch Blake suffer.

As Carson launches into his night-ending recap, the numbers stand at Team Adam 6/12, Team Blake 5/12, Team Shakira 7/12 and Team Usher 6/12. Plus, Adam starts the Adam Levine Expletive Counter with his first two swear words of the season. Will that number rise with the next set of blind auditions? Tune in tomorrow to find out.