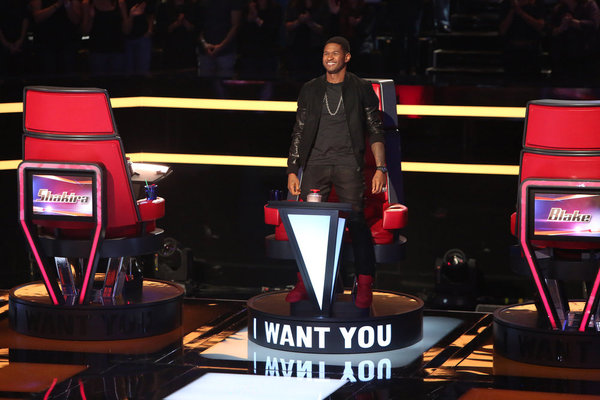 The rosters are halfway full as we finish the second week of The Voice. Adam has 6 of his 12 artists, Blake 5 of 12, Shakira 7 of 12 and Usher 6 of 12. This has traditionally been the time when the coaches start to get more choosy, guarding their rosters so that they’re not out of the game when someone fantastic comes along. Is that shift going to happen tonight?

As our coaches arrive, with Blake toting one of his many pointy awards and Adam grasping his ever-present coffee (you’d need it too if you were doing two concert tours and a TV show in the same year), we meet Audrey Karrasch, a one-time model who calls herself “obsessed with music.” That makes her at least the second former model to appear on The Voice (see: Erin Martin). Audrey’s version of Jessie J’s “Price Tag” immediately turns Blake’s chair, and Blake is not happy when Usher decides to go in, too.  When Adam starts to make a quip about Blake, Audrey cuts him off.

Audrey: You didn’t even turn around. Why do you care?

This dismissal wins her brownie points with Blake, but after very little discussion, Audrey abruptly announces that Usher is her coach. Adam asks Blake how it feels to have his ass handed to him.

Second to sing is Brandon Roush (not to be confused with Superman Returns actor Brandon Routh), who not only has a band but also teaches music to kids with autism. Brandon chooses The Beatles’ “With A Little Help From My Friends,” which Team Adam covered so very well in the first season. Shakira is the only coach to turn for Brandon, so he defaults to her team. Adam and Blake are surprised by Brandon’s appearance.

Adam: He looks like he’s in Megadeth. That’s awesome.

The third artist up is street musician Betsy Barta, who sings Adele’s “Set Fire To The Rain.” There really needs to be a moratorium on Adele songs on this show, unless Adele herself shows up. Her songs have been done quite a few times – Erin Willett and Kim Yarbrough both come to mind, and Betsy’s version isn’t comparable to either of theirs. Usher is the first coach of the season to utter the line about looking for something “very specific,” which means the coaches are getting more picky. At least Betsy gets a hug from Adam on the way out. Her failed audition leads into the montage of several other unlucky singers.

Can Patrick Dodd make a better impression? The dude with dreadlocks from Memphis sings, appropriately, Marc Cohn’s classic “Walking In Memphis,” and does a wonderful job of it. Half the people in the audience have probably never heard this song before, but it doesn’t matter. Shakira emphatically slams on her button, and Adam follows right behind her. The two of them compare themselves in front of their prospective artist.

Like many artists before him, Patrick decides to make this crucial decision by gut instinct, and signs up with Team Adam. We then briefly meet Trevor Davis, who joins Team Blake, and C. Perkins of Team Shakira. Agina Alvarez comes back after her unsuccessful audition in Season 3, sings a Shakira song, and ends up on Team Adam. Seriously, why can’t NBC just show all the performances by now?

Escaping the montage treatment is Orlando Dixon and his take on Ne-Yo’s “So Sick,” which prompts the camera to hover on Usher since he’s also an R&B artist. Just before Orlando finishes his last line, Usher decides to push his button, making Orlando an automatic member of Team Usher. This blows his mind, since he grew up listening to Usher, whom he refers to as his idol. Congratulations, Orlando!

There’s just one artist left tonight, and that’s Savannah Berry, who once sang with Sugarland. Savannah’s take on Taylor Swift’s “Safe and Sound” draws Adam, Shakira and Blake, in that order. But Savannah’s wearing cowboy boots, so you know what that means. She cites both Miranda Lambert and Adam as two of her musical influences, so take that as you will. Shakira thinks Adam and Blake might be almost deaf after three prior seasons. Blake name-drops like nobody’s business, before suggesting that he and Miranda might adopt Savannah, causing Adam to faceplant the front of his chair.

But Savannah’s not listening. Like almost every other country artist, she joins Team Blake. Blake didn’t even have to pull out his latest pointy award.

The final totals are in, and they are Team Adam 8, Team Blake 7, Team Shakira 9 and Team Usher 8. The Adam Levine Expletive Counter stands firm at 2. See you next week for even more chair-turning action!