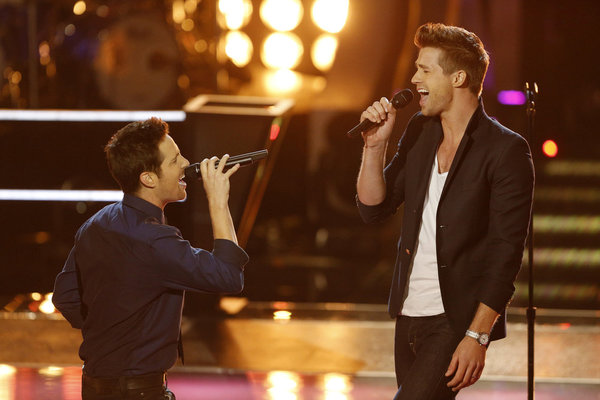 After last night’s six battles, The Voice is back tonight with six more  – or in actuality, three and three others condensed into about a minute and a half. Who moved onto the knockout rounds? Who went home? And did anyone get one of the five precious steals remaining in the competition?

Team Adam starts the night for the second evening in a row, with Michael Austin competing against Warren Stone. Michael turned two chairs with his audition, while Warren has the distinction of being the first country artist to have become a member of Team Adam after he spun three coaches. Now they’re facing off against each other in the battle of civil servants who are also country singers, with Jason Aldean’s “My Kinda Party” as the song.

Adam and advisor Hillary Scott tell Warren to be careful of falling off on notes, and are floored when Michael reveals that he just had a tumor removed from his sinus canal. (The camera catches Adam’s jaw dropping open.)  In second rehearsal, we get to sample Adam singing country, as he tries to show his artists what he’s looking for. Furthermore, the coach tells the audience via voiceover that he thinks there’s “only one spot on my team” for a male country artist. Well, obviously.

After that, it’s time to go to battle, with the obligatory camera cuts to Blake so we can gauge his reaction to Adam’s country artists. Both Michael and Warren have their moments, and they gel together as a good pair, which makes it really hard to decide which one of them is better.

Blake sides with Michael, while Usher starts talking about Warren’s “country swag” and picks him, and Shakira has no opinion. So it’s really completely up to Adam, and he selects Warren to move forward to the knockout rounds, based on the diversity of his voice. He also imparts another piece of Levine wisdom while doing so.

Adam: You can’t be a good coach unless you learn.

Sadly, Michael goes home. Even though Blake disagreed with Adam’s choice, he tells the camera afterward that he didn’t hear anything that he wanted to use his one remaining steal on.

Second to battle is Team Usher. He and advisor Pharrell Williams meet Jeff Lewis, whose rendition of an Usher song turned multiple chairs, and Josiah Hawley, whose version of Maroon 5 earned him three chairs as well. Usher has tasked the pair with performing “Roxanne” by The Police, which we know from Juliet Simms’ version of it can really challenge a voice. Almost immediately, Usher realizes that Jeff might not be that familiar with the choice, which could be problematic.

If you were looking for proof that Usher is definitely not Cee Lo Green in any way, shape or form, he takes Jeff to task for laughing at his mistakes during their second rehearsal. The look on his face is stone-cold serious. To get both singers back on task, he then confiscates one of their microphones and tells them they’ll have to compete with each other for the one that’s still there. Usher is definitely not a coach to be trifled with.

In the ring, the two guys seem like they’re singing separately most of the time. Even when the song starts to pick up, they don’t quite turn it all the way on. It’s a battle that seems a little more like fun than a battle. The coaches notice, too: Shakira says she “wasn’t impressed,” and Adam agrees that it fell flat. Blake is the dissenting voice, also commenting on Josiah’s choice of wardrobe.

Blake: He borrowed one of Adam’s T-shirts.

Usher doesn’t seem that enthused, either. He thinks the guys’ smiles didn’t really go with a song about pain, but concedes that at least the ladies liked it. He awards the win to Josiah, and without a steal, Jeff is sent packing.

If you’ve done the math and were wondering how NBC was fitting six battles into an hour-long show, you probably figured out what’s coming – it’s battle montage time! In short order, we find out that Team Blake’s Grace Askew and Trevor Davis battled, and that Grace won. Team Usher’s Audrey Karrasch and Jamila Thompson met and Audrey moved on. Tawnya Reynolds took on Mark Andrew for Team Shakira, with Tawnya going forward. There were no steals in any of those battles.

The next full battle round, and the last of the evening, is Team Blake’s Caroline Glaser, a two-chair winner, versus Danielle Bradbery, who earned three chairs, in the battle of the adorable singers. Blake knows they’re both younger and inexperienced, and hands them a song he thinks helps both artists, Corinne Bailey Rae’s “Put Your Records On.” Advisor Sheryl Crow thinks Caroline has a very unique voice, but Caroline is nervous about the notes Danielle can hit. Blake’s big goal is just to break both artists out of their shells, and tells them that the winner will be the one who has the most confidence.

With that it’s time for the ladies to compete, even though the bumper has already given away that one of them will be stolen, which takes some of the suspense out of it. Thankfully, the battle itself doesn’t suffer because of that editing slip-up, because it’s the best one of the night. It’s fun to watch, the song choice is entirely justified by what we hear, and the two ladies don’t sound at all like they’re on the younger end of the competition.

A pleased Usher says “the harmonies were a little shaky – it happens – and then you came together at the end.” Shakira compares the performance to “tangerine ice cream,” which bewilders Blake.

Blake: This is not a cooking show.

Adam calls himself “an imbecile” for not turning around for Caroline, berating himself for a little bit. You know Blake is distracted when he misses a golden opportunity to take a shot at Adam. He’s clearly smitten with Danielle. It’s kind of like Raelynn all over again.

Blake: I don’t know what your parents are feeding you, but I want a big loaf of that.

So where is Caroline going? Adam and Usher both want her to be their first steal of the competition. Adam wants a second chance to coach Caroline, while Usher steals Adam’s line about setting himself on fire, hoping that it will work a second time. Blake raises his hand to butt in, pointing out that Caroline’s a singer-songwriter, and she needs a coach who can coach her in that way. That’s a statement tailor-made for Adam, and Team Adam picks up Caroline, which makes Blake afraid. Uh-oh…

With week one of the battles behind us, one artist changed teams on Tuesday (Caroline Glaser from Team Blake to Team Adam) and four of them left the competition for good (Michael Austin, Jeff Lewis, Trevor Davis, Jamila Thompson, Mark Andrew). The second – and final – week of battles begins Monday.