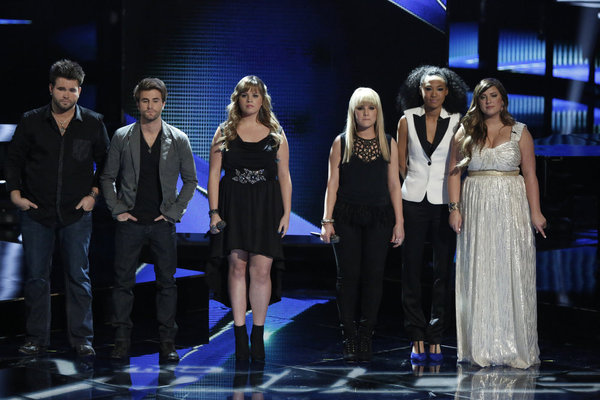 Could Blake Shelton three-peat on The Voice?

It certainly looks that way after this week’s results eliminated his biggest competition, and left all the show’s other coaches – Adam Levine, Shakira and Usher – each with only one artist to pin their hopes on.

Team Adam’s Judith Hill and Sarah Simmons, who both turned four chairs in their blind auditions and were each considered possible winners, were sent home on Tuesday. Their exits mean that the only Team Adam singer left is Amber Carrington. Amber is actually a country artist, as Blake has mentioned several times on the show, including this week.

Shakira has only Sasha Allen and Usher is counting on just Michelle Chamuel.

Meanwhile, Blake has all three of the acts he brought to the Top 10 – Danielle Bradbery, Holly Tucker and The Swon Brothers. If you’re doing the math, that means there’s a 50% chance that a Team Blake artist will be the new Voice champion, with each of the other three coaches having a just slightly better than 16% shot.

Danielle has long been considered another favorite, and with Judith’s departure, becomes the new best bet. This week, she was again referred to as a potential huge star in country music following her performance of The Judds’ song “Grandpa.”

Since two artists are dropped from the show each week, the worst-case scenario is that The Voice sees two of its coaches taken out of contention in the same night. It wouldn’t be unheard of: last season’s finale was also Team Blake-heavy, with two of the three finalists being from that group.

If one of Team Blake’s three artists does in fact earn the season title, it will be the third time in four seasons that the country music star has been The Voice‘s winning coach. He led Cassadee Pope to victory last December and before that, Jermaine Paul won last May. (The show’s first winner, Javier Colon, was from Team Adam.)

However, it’s worth noting that audiences haven’t yet seen how Blake’s picks perform in the music industry. Cassadee Pope signed her record deal and has been on tour with Rascal Flatts and The Band Perry, but is still working on post-show music. As for Jermaine Paul, he’s released only two singles since being crowned the champ, and one was a cover. His album “Finally” still doesn’t have a definite release date.

Fans will find out if anyone can stop Team Blake when The Voice continues next Monday. In the meantime, you can join Blake, Usher and a slew of other musical guests including Reba McEntire and OneRepublic’s Ryan Tedder as NBC broadcasts Blake’s “Healing the Heartland” concert to benefit disaster victims in Oklahoma. The special will air tonight at 9 PM ET/PT on NBC and several NBCUniversal cable channels.

2 thoughts on “Are We In For A Team Blake Three-Peat?”