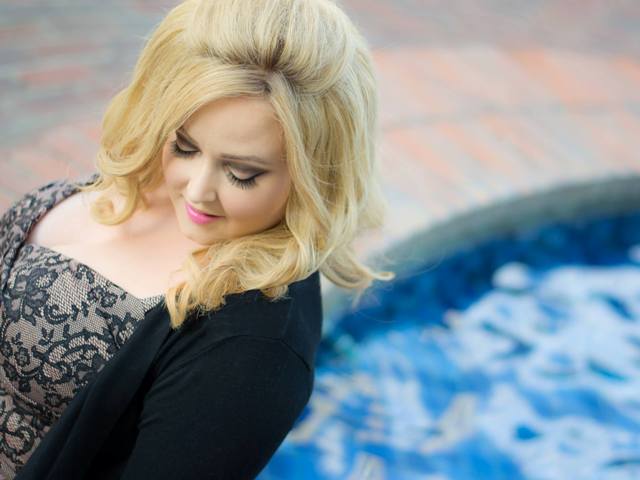 Katrina Parker is ready to spread her wings and fly. After making it to the semifinals of season two of The Voice, the soulful singer took the next year-plus to craft the perfect follow-up. Now that extra deliberation is on the verge of paying off, as she’s preparing for the release of her new album, In and Out of the Dark. Katrina recently took some time to sit down with BFTV to dish on the upcoming record, and what she’s learned about herself since she surprised America.

“I really took my time with this record. I spent months writing it, and then I spent months funding it, and picking out the right producers and the right kind of musical aesthetic,” she explained. “But I don’t feel pressure. More than anything I want it to be amazing. And I really do kind of want to step out from [the show]. As much as I love The Voice, this is the next part of my career.”

It’s been a long process from creating music to record release for Katrina, who launched a successful Kickstarter at the beginning of the year before heading into the studio. She called the whole experience “really surreal. We did the fan funding back in January; it got fully funded in mid February. We had a lot of pre-production. It was a lot of chasing schedules and coordinating. We spent a lot of time thinking about what we wanted to do on the songs. And then we crammed all the recording into like one or two months. But it’s been really incredible. It became clear to me that everything I wanted to communicate is on this record.”

“I think one thing that you maybe didn’t see on The Voice is that my music has a more powerful aesthetic,” she explained. “What you didn’t get to see is me being really powerful, and i think you get a lot of that on this record. i’m a tougher, stronger, more powerful person. I think it’s a natural next step.”

Part of that newfound strength comes from Katrina’s experience on The Voice, where she emerged as a surprise contender and made it through to the semifinals before coach Adam Levine opted to move forward with eventual third-place finisher Tony Lucca instead of her.  While some fans are still up in arms about her dismissal, she reiterated that she has no hard feelings toward her coach or anyone else involved with the series.

“The show changed my life. It’s made it possible for me to do music as a career,” she reflected, adding that she doesn’t feel any need to return, as other artists have done in the past. “I don’t think I need to go back onto that stage. I love The Voice and I feel like they already did so much for me. My to-do list is more about moving forward.”

That includes taking responsibility for steering her career now that The Voice is well in the past. Katrina knows that reality TV doesn’t create overnight superstars, and there’s only so long you can ride the wave of national attention before you have to stand on your own. She told us, “You have to work hard, you have to be scrappy, and you have to get as much out of the experience as you can, whether you were Top 48 or Top 8.”

Now Katrina is focusing on the launch of her new album. This past weekend she joined fellow Team Adam alumnus Judith Hill for a concert at Universal CityWalk Hollywood’s 5 Towers. There’s a CD release party scheduled at the Hotel Cafe in Los Angeles, and she’s hoping to tour, provided that the logistics can be worked out. She knows that this is a big moment for her, one that can change the course of her career again, and she’s intent on not wasting it.

“I think the biggest goal for myself is to really get as much out of it as I can,” she said. “I really do want to pitch a lot of it to film and TV. The success will be if in six months I’ll still doing music full time and I’m still promoting this record because it has legs. Then I’ll know that for me it was a success.

“I have very high hopes for it. I am happy with it,” she continued. “This was clearly in my control. I worked with the people I wanted to work with. I did what I wanted to do.”

Katrina Parker’s album In and Out of the Dark releases on September 10; it can be pre-ordered through iTunes here. You can also keep up with Katrina by visiting her website (katrinaparker.com) or following her on Twitter (@katrinapmusic).