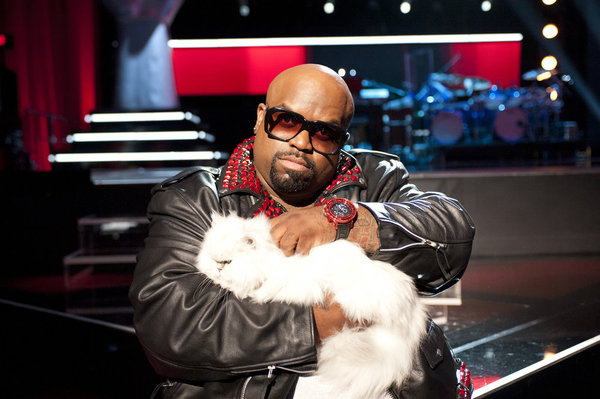 The Voice coach Cee Lo Green has reunited with Goodie Mob, and the group is bringing their “Age Against The Machine” tour to Los Angeles’ House of Blues tonight, and San Francisco Thursday. But the pet-loving singer isn’t the only performer from the hit NBC series to be visiting the Golden State right now. Fans who are eagerly awaiting The Voice‘s September 23 premiere can also see a number of their favorite artists live over the next two months.

There are three venues that are Voice friendly, with several singers on their calendar. The first is one of Los Angeles’s best music venues, Hotel Cafe. It plays host to Season 1 runner-up Dia Frampton for three shows on September 6, 9 and 16. Season 2 semifinalist Katrina Parker is hosting a release show for her upcoming album In and Out of the Dark there on September 10. Season 2’s Jamar Rogers is scheduled to appear on September 27.

Lestat’s Coffee House in San Diego is home to Rebecca Loebe from Season 1 on September 5, and Season 2’s Charlotte Sometimes will visit there on September 22.

Up north is San Francisco’s Hotel Utah, where Rebecca Loebe will perform on September 10, followed by Charlotte Sometimes on September 17.

There are also a variety of other cities playing host to Voice artists in the near future. Season 3 winner Cassadee Pope will be performing two dates in Southern California, at Chula Vista’s Sleep Train Ampitheatre on September 13 and then Irvine’s Verizon Wireless Ampitheatre on September 14. “11,” the latest single from her upcoming album Frame by Frame, was released on Tuesday.

It all leads up to when The Voice returns to the airwaves on Monday, September 23, with Green and Christina Aguilera returning to the series alongside coaches Adam Levine and Blake Shelton.

You can find more information about every The Voice artist’s upcoming performances through September by visiting the concert calendar at Big Red Chairs.