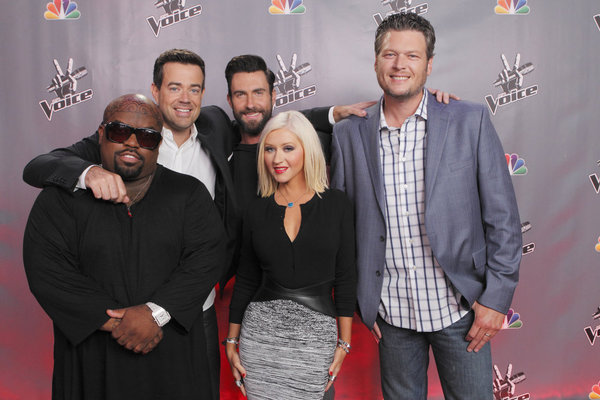 After Team Adam and Team Blake sung for your vote on Monday night, Tuesday night it’s Team Cee Lo and Team Christina who are center stage on The Voice.

If you didn’t see enough of Christina performing last night, she’s added to the guest performance tonight as well. After that’s out of the way, Team Cee Lo’s Amber Nicole is performing Season 3 winner Cassadee Pope’s lead single, “Wasting All These Tears.” It’s the first time a Voice artist has performed a song by a show alumni (coaches excluded), and like many things Cee Lo does, it’s eyebrow-arching. It hasn’t been that long since we first heard Cassadee do the song – do we really need to hear it covered already? The answer is no – Amber doesn’t hit the big, sweeping moments like Cassadee does, and those moments are the ones that drive this particular song. It doesn’t compare to the original and it’s not distinctive from the original either, leaving Amber in some unremarkable middle ground.

At least one coach kind of agrees with our opinion. Adam calls the performance “good” and delivers some constructive criticism about Amber missing the big note. Blake concurs with Adam’s critique. Christina is more positive, though she thinks that note was “a little sharp.” Cee Lo thinks his artist did “a wonderful job” and “an exceptional job,” but then again this is his artist, so it’s understandable that he’d be more encouraging.

After mixing things up between teams during last night’s show, tonight The Powers That Be have decided to steamroll through Team Cee Lo. This would seem to be an odd decision, because anyone who doesn’t like Team Christina can check out of the show at the halfway point, which can’t be good for ratings. But, nobody consulted us on that one.

Jonny Gray is second to perform, with “Bitter Sweet Symphony” by The Verve. It’s a good fit for his voice, which sounds just similar enough to the original track to make it feel comfortable. He might even be enunciating a little more, too, which we are always in favor of. This isn’t a show-stopping kind of song, but Jonny is clearly enjoying himself performing it and the crowd loves him.

So does Adam, who praises Jonny for recreating the song “really beautifully and really well,” and says he really enjoyed the performance. Christina calls him “consistent” and would love to see him let loose a little more next time. Cee Lo rambles for a bit before saying he hopes America enjoyed the performance as much as he did. And Blake, well, Carson doesn’t want to know what Blake thinks.

Next up is…another irrelevant Sprint Skybox segment. Bless Carson for trying to make this work. The only thing that this is any good for is Blake once again joking about Adam’s wardrobe, quipping that he backs over his T-shirts four times in the parking lot and sets them on fire before wearing them. We’re not sure how qualified Blake is to be giving wardrobe critique, but the quip is hilarious, as is Adam yelling at Blake to shut up during it.

Here’s Tamara Chauniece with a huge classic, Gloria Gaynor’s “I Will Survive.” This is the kind of track you’d have expected a Sasha Allen or Kim Yarbrough to have sung. Tamara does her best with it, although she doesn’t really hit the max energy level until toward the end of such an anthemic song.

Adam calls it her “best performance at the best time.” Blake comments on how nice everyone is being (we’ve noticed, Blake) before saying that “you did that song great.” Passing over Christina, Carson asks coach Cee Lo for his opinion, which begins with a diatribe on his “mission statement,” then a compliment on Tamara’s looks, followed by one the show, before ending with finally saying he thinks she’ll make it through.

Next is one of our picks to watch: Kat Robichaud, who we’re still a little bit afraid of after that knockout round performance. Cee Lo gave her “She Keeps Me Warm” by Mary Lambert, which goes in the completely opposite direction – it’s much calmer and slower, asking her to tap into a completely different part of her range. Smart choice there, Cee Lo. Kat delivers a tender rendition without sacrificing any of that unique sound she’s got. Plus, we are in favor of random hugs. If she can continue to be this diverse, Team Cee Lo should have a bonafide finalist.

Adam tells Kat that she has seven gears and that he selfishly wanted to see all seven, but that her hugging a total stranger was “pretty sweet.” Then we have to laugh when Carson asks Christina to give her thoughts by name and she says “Me?” like there’s another Christina Aguilera somewhere around. Once she clicks back in, Christina calls the performance “lovely and really beautiful.” Blake gets left out again as Cee Lo explains his rationale for giving Kat this particular song. He’s never been very to the point, but he does seem to be a bit extra rambly this evening.

Caroline Pennell is giving us The White Stripes’ “We’re Gonna Be Friends,” because he thinks they would’ve been if they’d gone to school together. Let’s all take a moment to think about what Cee Lo must have been like in school. Now let’s listen to Caroline, who has officially gotten the label of this season’s adorable teenager with the slightly different voice (see: Xenia, Melanie Martinez). She’s not just cute, but she’s also competent.

Then this hugely awkward moment happens.

Blake: I could literally be getting an amputation…if she was singing, all I’d be thinking about is cotton candy…You could’ve been singing about killing people and I could be up here wanting to skip around on the stage.
Adam: Let’s put a pin in that.
Blake: I should’ve left it at amputation.

Blake’s on a roll tonight, ladies and gentlemen.

Now it’s time for the performances from Team Christina. She’s handed Gnarls Barkley’s “Crazy” to Josh Logan, who takes it in a different direction and slows it down a bit. Thanks to Josh, we’ve now finally learned all the lyrics to this song. Like Jonny, this isn’t the kind of high-energy song that’s going to necessarily grab America’s attention, but he’s done a solid job with it, and proven that he ought to stick around if only so we can see what he does with other choices.

But what does Cee Lo think? He’s flattered that anyone would perform the song, and then points out that you have to be “specially trained” to do it, so it sounds like he might be critiquing…but then he doesn’t. He’s thrilled. Adam wanted it to be “a little more scaled back” than it was. Christina calls it “such a great job” and then reminds us all that “Crazy” was the coaches’ performance from season one, as a way of pointing out how unique Josh’s version was. And she makes an Amadeus reference.

Following Josh is Olivia Henken, who’s no stranger to pressure as she’s entered “over a hundred singing competitions” before, and who’s coming to us with Katy Perry’s newest hit “Roar.” Christina wants to see her turn pop a little more country, and add some dimension to it as well. A country artist doing Katy Perry just makes us think of Amber Carrington performing “Firework” last season. This is not that. It’s an intriguing but not necessarily compelling take on the original.

Blake, who’s finally allowed to talk again after his “amputation” comment, is surprised and pissed off at how well this works. Christina is surprised again when Carson jumps to her immediately after Blake, and she tells Olivia that “you can do it all.” We’re not entirely sold on that, but we’d certainly like to see Olivia continue to branch out.

Stephanie Anne Johnson returns to Team Christina with Ray Charles’ “Georgia On My Mind.” Stephanie’s already a fan of the song, and it shows in her performance. She’s comfortable with the material, if not necessarily with the stage. Will her soulful rendition be enough to keep her around when she’s on the same team with fan favorites Caroline Pennell and Matthew Schuler? That’s the question.

Cee Lo tells Carson that the rendition gave him “mixed emotions” and calls it “a whole new different version of” Stephanie. Adam liked it, though he wouldn’t ever want to sing that song himself. Poor Blake gets avoided yet again (did he tick someone off tonight?) while Christina reveals that Stephanie can also do opera. She actually stops too early and Carson has to prompt her to keep talking. But this means we get some props for Stephanie’s grandma, to whom we are sending our best wishes as she recovers from surgery.

Matthew Schuler’s been a powerhouse all season, so this would be a great time to assign him…Miley Cyrus’s “Wrecking Ball”?!? We’re just going to take a moment to shake our heads at that one. Thankfully, Matthew’s so talented he can make even that sound good. He sort of reminds us of Kris Thomas from last season, in how he can make something out of a song you wouldn’t expect him to perform. Matthew should be safe going into next week, based on the in-studio audience reaction, but we definitely want to see some more challenging choices for him going forward.

Cee Lo quips that “I hate you so much,” which makes Matthew crack up with laughter. “I share Cee Lo’s pain,” Adam concurs. “And I’m very upset with you because you’re not on my team.” Blake points at Matthew and tells his team that “this is the guy” they’ve got to look out for, and he’s absolutely right about that.

Closing out the night is Jacquie Lee with “I Put A Spell On You.” She might be the youngest artist left in the competition, but she is not singing like it. This is kind of like Juliet Simms’ performance of “It’s A Man’s, Man’s, Man’s World” – here comes an artist who takes a classic song and just blows the windows out performing it. The less experienced Jacquie doesn’t have the same swagger on the stage that Juliet did, but she brings the house down just the same.  If she doesn’t stick around after this, Thursday will be a very sad day indeed.

As evidenced by the roar of the crowd that drowns out the coaches for a good minute. (Watch Adam when Carson tells Cee Lo to “make it quick” – he’s shaking with laughter so much that he’s got to look down.) Adam jokes about Jacquie’s performance being so good Cee Lo got angry. Christina talks about Jacquie’s growth, and we’ll agree with her there. Voting is going to be very interesting this week. Who’s got your endorsement?

Remember, the results from this week’s live shows will be announced not tomorrow, but on Thursday during a special live elimination episode at 8 PM ET/PT. For more on all things related to The Voice, be sure to check out BFTV’s sister site Big Red Chairs and follow us on Twitter (@bigredchairs).