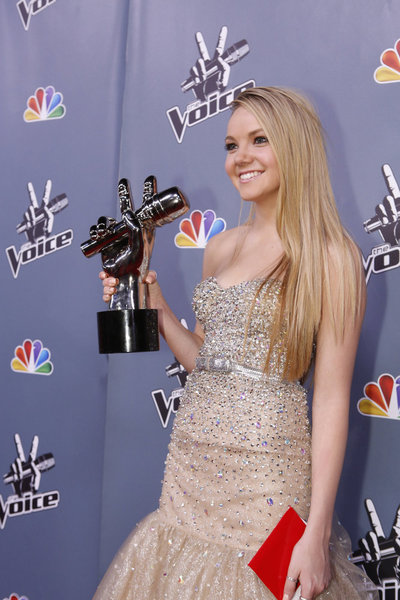 The Internet is abuzz with the news that The Voice has announced its Season 5 finalists, but that’s not all that’s happening this week. We had several former competitors return to the show, a few more drop by just to say hello, and Blake Shelton crashed someone else’s Christmas special again this year.

On Tuesday, four acts from The Voice‘s past two seasons came back to promote their new music, and we found out what they’ve been up to. Season 3 winner Cassadee Pope performed the next single from her recent album, and discovered that the album has gone gold.

Her successor and Big Machine Records labelmate, Danielle Bradbery, just released her self-titled debut album and has her song being used in a video package for NBC’s coverage of the upcoming Sochi Olympics. You can check that out below.

Season 4 runner-up Michelle Chamuel premiered “Go Down Singing,” her first single since the show, with some help from the USC marching band’s drumline. She revealed that she’s still in touch with coach Usher and working on an album to be released next year. The best place to find more information about that is her website (michellechamuel.com).

As for The Swon Brothers, Zach and Colton dropped their new single “Later On.” They’re signed to Arista Nashville and also working on their forthcoming album. And they have lost none of their sense of fun whatsoever, with Colton joking that Zach still blames him for bad shows.

There were several old friends in the audience on Tuesday that did not perform, all from Season 2. We saw Team Cee Lo’s Jamar Rogers (who is looking much better after his health scare earlier this year!), Team Christina’s Chris Mann, and Team Adam’s Katrina Parker. Jamar is one of the artists featured on Starbucks’ Voice music sampler, which you can download for free online by visiting Starbucks.com. It also includes music from Michelle Chamuel, Terry McDermott, and Nicholas David, among others.

As for Chris and Katrina? He’s continuing his takeover of PBS, as his second special, Home For Christmas, is now airing on stations around the country. Check your local listings for specific channel and airdates, or you can also watch it online via the PBS website. A CD/DVD combo pack is available on Amazon too. Here’s the trailer.

While Chris is still touring and getting ready to work on his second album, Katrina just put on a wonderful Christmas show at the Hotel Cafe in Los Angeles, which she’s bringing online to StageIt very soon; be sure to follow her on Twitter (@katrinapmusic) for more info.

If you watched Kelly Clarkson’s holiday special on NBC last night, you were treated to our very own Blake Shelton in an elf costume. This after he had his own special last year, along with dropping in on Michael Buble’s, as well. Basically, it’s not Christmas on NBC until Blake shows up somewhere.

Oh, and while you were reading this, Blake probably won another American County Award, too. He took home four this week. So, congrats Blake! You may not have an artist in the Voice finale this year, but we think you’re going to be okay.

For more on all things related to The Voice, be sure to check out BFTV’s sister site Big Red Chairs and follow us on Twitter (@bigredchairs).