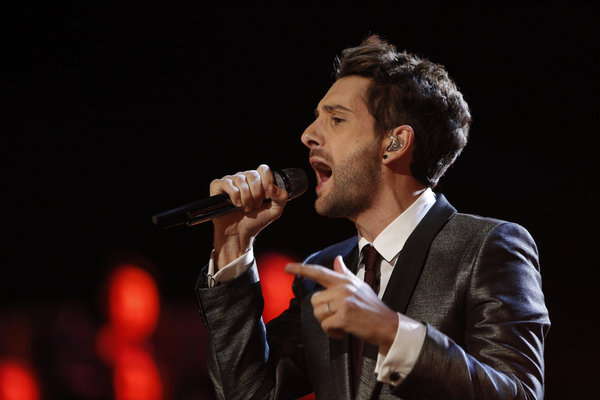 If you’d asked fans a few weeks ago who they expected to see in The Voice’s finals, they might not have said Will Champlin.

But the 30-year-old singer and musician from Team Adam has been the show’s most improved performer week after week, and he capped his miraculous run on Monday night with some of his best work.

Will’s second attempt at his blind audition song, Gavin DeGraw’s “Not Over You,” was a vast improvement on his first take, which he credited to being more relaxed.

“I didn’t sweat it,” he explained to BFTV on the red carpet. “I felt relaxed. The blind [audition] was cool, but I definitely was like probably like stiff as a board. Tonight I was loose.”

He followed that up with a duet with his coach, Adam Levine, and then a heartfelt version of Bryan Adams’ ballad “Everything I Do (I Do It For You)” which ended with a spontaneous moment shared with his wife and young daughter.

“That was just kind of in the moment,” Will explained.

As for the song choice, “[Adam and I] just kind of landed on the same page. We were going through other songs and they were cool, but they just didn’t hit the epic quality of something like this. We’re both kind of like, ‘They’re not big enough.’ And that’s when I was like, ‘You thinking what I’m thinking?’”

Described by Levine as the “pinball” of the season for how he was saved twice by two different coaches during the pre-taped rounds, Will broke out during the live playoffs and earned America’s support. He’s only been in the bottom of the results once, when he edged out Team Blake’s Cole Vosbury for the last spot in the finals.

Audiences have had the chance to watch him evolve over the weeks of live playoffs, and see so many different sides of him, whether it’s being the only musician still left in the competition, or being the first male artist in the show’s history to perform Etta James’ classic “At Last” – in an iTunes-charting performance, no less.

And while he may not be the favorite among the remaining artists, Will’s coach and his fellow finalists weren’t shy in their praise of his talent and his incredible work ethic.

“No one works harder than Will,” said Levine, before telling him, “I’m most proud of you in a way, because you’ve really overcome the biggest hurdles in this competition.”

And said Team Christina’s Jacquie Lee, “Will has such a big heart. He’s not good at the mushy stuff, and he makes an attempt every week, and I love him for that.”

Regardless of who wins The Voice on Tuesday, Will has earned his way to some much deserved recognition. You can follow him on Twitter (@willchamplin) and tune in tonight to see him on The Voice‘s two-hour finale, beginning at 9 PM ET/PT on NBC.